The location of graves at Indonesia’s Muslim cemeteries, like this one in Pangkal Pinang, are not planned. Instead, the day someone dies a family member will ask the cemetery caretaker to find space, at which point the family will hire a gravedigger. (Anna DeVries/ Indonesiaful)

In the two months since I began teaching in Pangkal Pinang, it has become clear that classroom time is not always a priority for Indonesian teachers. My colleagues often urge me to attend meetings, greet visitors, meet city officials, grant interviews. The list goes on and on. Most anything is prioritized over teaching.

Recently, I tried fighting “the man” by demanding to go to class and teach, but I learned that students anticipate abandonment. When I showed up, half of them were missing.

“Anna, this is Indonesia,” my co-teacher told me. She had followed me to class because I insisted I needed to teach. I could see from her face that my efforts would be useless. I decided that I was powerless against class cancellations and alternate priorities, so I gave in to the system.

Succumbing to the dominant culture, I found myself leaving school one day and piling into the back of a car with several teachers and the former headmaster (we’ll call her “Ibu B”). I thought I was headed to the police station for my necessary immigration paperwork. The trip was soon sidetracked. “You will have your first trip to the hospital,” my counterpart/translator/frequent mother announced. I was confused, but such is my usual state in Indonesia. As we wound our way through the streets of Pangkal Pinang, the conversation stayed light, but I inferred that someone in Ibu B’s family had just suffered a stroke and we were on our way to visit.

We reached the hospital parking lot and piled out of the car and into the hospital quickly. “My sister,” Ibu B said as she gestured forward, toward the next door or to a woman standing by it. I couldn’t tell, and was still confused about the stroke victim.

I thought we were looking for the patients’ rooms, but we walked out to the main reception area and up to an outside entry labeled “EMERGENCY.” The next thing I knew, I was standing at the far right side of a room no larger than my high-school cafeteria. I noticed the crying first. The faint sounds were quieter than wailing, but heart-wrenching all the same.

In the time it took me to take in the scene in front of me, Ibu B and the two other teachers had already pushed through the mostly gaping “operating room” curtains and positioned themselves around a patient, joining a hospital staff dressed in green scrubs and face masks and several crying family members. Everyone seemed to be crowding around and touching the motionless body.

As I stood outside the room, all I could see were bare feet and legs lying limp on a gurney. I started to feel intrusive and averted my eyes. I surveyed my surroundings. I noticed a sign next to me on the reception desk listing hospital charges. The most expensive was a stay in the ICU totaling 400,000 rupiah. Just over $40. 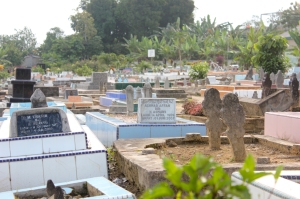 Muslim, Chinese, and Christian cemeteries are vastly different in Indonesia. In this Muslim cemetery in Pangkal Pinang, each grave is constructed out of of various kinds of ceramic tiles depending on wealth. For the first months after death, wood will substitute for the ceramic tiles. (Anna DeVries/Indonesiaful)

I peered back into the “operating room” to find a nurse disconnecting the IV while someone else grabbed a blue sheet from a nearby tray. The blue sheet must be universal. I knew what that one meant at least.

They draped it over the feet, and then pulled it up over the legs, arms and chest. The head stayed uncovered. Ibu B’s husband walked over and placed his hands on both sides of the head, while others moved around to bury their heads in the blue sheet. Three men of varying ages stood beside the sheet and stroked the deceased’s face.

Suddenly we were back in the car and winding the streets of Pangkal Pinang again. We reached a house. People were already gathered outside. Ibu B was already standing on the front porch. How did she beat us? The ambulance was parked in the front of the next house and when we arrived two men were carrying the body from the hospital inside on a stretcher.

I didn’t see the body when I went inside, but I knew it was in the next room because women seated against all the walls had tears in their eyes. I helped spread out the remainder of the grass mats on the porch and sat down against the wall next to Ibu B. The room was silent save for the faint buzzing of men on cellphones. The sound of the room splintered only once when one man threw his phone against the floor in saddened rage.

Outside, a tent sprang up and people began pouring in and filling the red chairs that sat beneath. In a quiet moment, it was explained to me that Ibu B’s sister-in-law had suffered a second stroke that morning.

Suddenly I began to understand why teachers skip class. Relationships trump work. How could people possibly be in school when their friends, neighbors, relatives were suffering? Word travels and everyone heeds the call, in bad times and good.

Time for evening prayers? Time for the light to go on. No need to worry the neighbors. (Anna DeVries/Indonesiaful)

It is also the same reason why I keep my porch light on every night – neighborhood eyes serve as streetlamps, protecting and caring for me.

I can’t help but compare this neighborhood to my one at home. While friendly, my Iowa neighborhood lacks the same sidewalk culture, the same neighborhood allegiances, the same sense of community. I have been accepted more readily as a stranger here than as a native in my hometown. I often wonder if I’ll ever be able to replicate the strength of these communal bonds. For now, I’ll simply bask in the glow of porch lights and relish my time in this most closely connected of places.