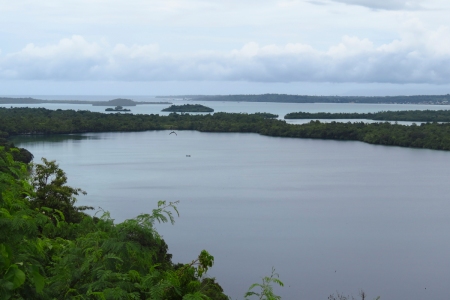 Calm waters extend around Bukit Masbait, the highest point on the island of Kei Kecil in Maluku, Indonesia. (Benjamin Moseley/Indonesiaful)

This was the response from my friends and neighbors immediately after I told them I would be traveling to the Kei Islands in February. Initially, I thought this was a silly question coming from people who live on the island of Seram, an island whose name actually translates as terrifying or horrifying in bahasa Indonesia and that still has a substantial population of people who cling to old animist traditions. The Kei Islands could not possibly be more immersed in the “dark arts” than Seram. However, I, too, almost began to believe in the Kei Islands’ magical aura when my first flight to the islands was cancelled under questionable circumstances.

The Kei Islands are a cluster of small islands in the southeastern part of Maluku, not far from the Indonesian province of Papua on the island of New Guinea. They are known for their beautiful beaches and the people’s commitment to age-old Malukan customs, such as pela (a system of sacred alliances between villages and clans) and sasi (a system of preserving nature and resources). While today most Kei Islanders practice Christianity – mainly Catholicism with a Protestant minority – and, to a lesser degree, Islam, these old traditions and beliefs continue to influence the everyday lives of the islands’ inhabitants. These shared customs still bring together the Catholics, Protestants, Muslims, and Animists of the Kei Islands into one coherent community.

I began my journey in the Kei Islands in the town of Ohoidertawun, on the northern coast of Kei Kecil, or “Little Kei.” The draw of this small town is its access to beautiful beaches on the island’s north coast and the presence of a complex of guest houses, known as Savanna Cottages, run by Dutch-born Gerson and his wife Lucy. Gerson is both a Westerner and a Malukan, a child of the Netherlands’ large Malukan community who moved to his parents’ home island as an adult. He understands how to host Westerners and is also able to give helpful explanations of Kei culture. In addition, the cottage-style rooms and seating areas by the beach are perfect for simply relaxing with a book or an ice-cold beer. 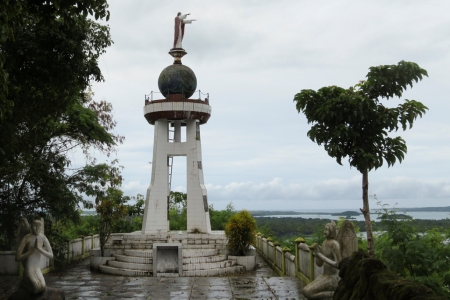 A statue of an open-armed Jesus overlooks the surrounding countryside atop Bukit Masbait on the island of Kei Kecil. (Benjamin Moseley/Indonesiaful)

Just east of Ohoidertawun lies Bukit Masbait, Kei Kecil’s highest point. The hill is an important pilgrimage site for the islands’ Catholic population, particularly during Easter. As you climb up the hill, you pass a series of reliefs depicting the Catholic Stations of the Cross; at the top of the hill there are statues depicting the events leading up to the Resurrection. A statue of Jesus on top of the globe, donated by the Vatican, embraces the surrounding countryside. Even if you are not a practicing Catholic, the view on top of Bukit Masbait is worth the climb. The wonderful view is a panorama of the cities Langgur and Tual, the bay, and the surrounding islands.

If you head to the west coast of Kei Kecil, you will eventually come upon the Kei Islands’ premier destination: Pasir Panjang, 3 kilometers of white-sand beach that perfectly contrasts with the turquoise and sapphire-blue waters that surround the Kei Islands. On the weekend, picnickers from Tual and Langgur swarm the beaches, but on the weekdays it is likely that you will be able to enjoy a section of Pasir Panjang all to yourself.

The village of Ohoililir, at Pasir Panjang’s northern end, is an incredibly beautiful and quaint village that provides travelers with accommodations. Coaster Cottages, run by locals Bob and Ketty, provides multiple options for room arrangements and meals. The people of Ohoililir are also incredibly happy to show you around their town and their woma, a small shrine that is the spiritual center of every Kei town.

Kids play around in a public pool in the town of Evu in southern Kei Kecil. (Benjamin Moseley/Indonesiaful)

Traveling south of Pasir Panjang, you encounter a series of small villages that have their own sites and pleasures to offer. Just outside the town of Letvuan, Goa Hawang is a cave with clear, crystal blue fresh water where local youth enjoy swimming after school and on the weekends. Further south, the town of Evu has constructed an amazing public pool from the local springs. The existence of such a beautifully built pool in southern Kei Kecil is as wonderful and refreshing as it is surprising.

After four amazing days travelling in the beautiful Kei Islands, I had to return to my site to lesson plan for the following Monday. The sites, nature, and people of the Kei Islands definitely gave me the break I needed before returning to my school. I was only able to truly explore Kei’s main island, but I know that the other islands certainly have a lot to offer in their own right. And these islands definitely do have some sort of magic. It may not be black magic, but there is something about these islands that draws you into them and keeps you wanting more. While I was at the airstrip in Langgur waiting to fly back to Ambon, I remembered something that Gerson in Ohoidertawun said to me. “I know you’ll come back to the Kei Islands. I’ll use my Kei magic on you. You’ll come here every few years.” I hope so.

About the author: Benjamin Moseley is a Fulbright English Teaching Assistant based in Masohi, Maluku. Moseley graduated from Lewis & Clark College in 2012 with a bachelor’s degree in history and Chinese language. Before living in Masohi, Moseley has lived in Yogyakarta, Batam, and Singapore, where he graduated from the Singapore American School in 2007. Contact him at benjaminlmoseley@gmail.com.