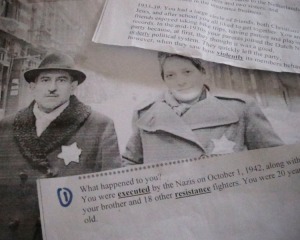 Students adopted new identities to follow the lives of people affected by the Holocaust. (Sarah Brafman/Indonesiaful)

Over the course of my year teaching in Indonesia, I have had some troubling encounters with Nazi symbolism. I have repeatedly seen several students walking around the halls “Heiling” Hitler. I have cringed as I walked past swastika doodles on desks, notebook covers and body parts. I have seen students put their fingers over their mouth mimicking Hitler’s mustache or go so far as to affix black tape to their upper lip in Hitler fashion.

One student drew a fairly accurate picture of Hitler holding a Nazi banner and saluting onto a bingo worksheet. He titled the picture “Heil Hitler.”

Needless to say, I have privately reacted to each display with pain and angst. Both my grandfathers served in the U.S. Army during World War II. My family includes ethnic ancestors from Germany and parts of Poland and Russia where their and other ethnic populations were targeted and ultimately exterminated by the Nazis. I have countless friends whose grandparents survived the Holocaust.

On a broader scale, no one in my community would dare question the gravity and legitimacy of the Holocaust. Its undeniability is a fact of life long since established and relentlessly researched and validated.

But I am far from home — away from the security of indisputable history and assumptions of interdenominational religious understanding. I spoke with a close friend and colleague who teaches German (although she herself is Indonesian, not German), and she remarked that she too had heard and seen similar displays. One day Frau, as the students refer to her, came into the office and said, “Sarah, I am worried that the students think Hitler is cool….They just have no idea about World War II.” She continued with a suggestion and a request — “Can you come teach my classes about it?” — since she knew I majored in history. My degree never felt more useful.

I jumped at the opportunity. This seemed like the perfect way to approach the topic. I didn’t want to simply barge into my classes and arbitrarily teach about this seemingly unrelated and often controversial topic. I knew I would accept Frau’s offer but immediately began to feel a great weight. How would I be able to encapsulate the gravity of the Holocaust in one 90-minute class?

I consulted friends teaching in Indonesia who would be able to conceptualize what might work in an Indonesian classroom, as well as teachers back home who have taught the Holocaust (though my students have little to no connection to this particular era in Western history). I wanted to ensure some level of objectivity considering that the topic is so personal.

I lost sleep. I had vivid nightmares.

In order to personalize the Holocaust I told the students that they were each going to be someone else during that day’s class — someone who had lived during World War II and/or the Holocaust. Drawing from various sources, primarily the U.S. Holocaust Memorial Museum in Washington, I crafted an identity card for each student. Some students became Jews sent to the concentration camps; some were German SS soldiers; others Christians who hid Jews during the Holocaust. Others still were Jewish resistance fighters or gypsies or homosexuals who also suffered greatly at the hands of the Nazis.

I decided I would parcel out different pieces of the student’s “alternative” biography as the lesson progressed. I handed the students their first ID card with an introduction to who they were. I wanted to be sure the students could personalize this immense topic since the numbers six million or eleven million people murdered are too great to fathom.

I tried to center the lesson on the idea of symbols. What ideas and history is one supporting by “Heiling” Hitler or drawing a swastika? I spoke about Hitler’s rise to power and the evolution of Nazi ideology, specifically pan-Germanism. I drew from Hitler’s own words in Mein Kampf and other writings. I explained about Aryanism and about Hitler’s blaming Jews and other specific groups of people for Germany’s problems following WWI. I spoke about the gradual reviling and exclusion of Jews from German society first through the Nuremberg Laws, then by the requirement for physical separation by wearing a Jewish star, sequestering all Jews in ghettos, and finally sending them to concentration camps for ultimate debasement and murder. I showed the students videos: of Auschwitz, President Obama’s visit to Buchenwald (thank goodness for an American president that my students actually respect), an American soldier’s recounting of liberating Dachau, and footage taken by American soldiers the day after liberating Dachau.

Finally, I handed the students a last slip of paper with the question: “What happened to you?” The paper revealed to the students whether or not they survived the war. The students reacted strongly, each caring deeply about his or her alternative fate.

Finally, we sat in a circle and the students shared their “alter-ego” narratives with each other. We then talked about what we can learn from this history and how they think it may pertain to their lives. We then revisited in conversation how we feel about those original symbols we spoke about at the beginning of class.

Questions ranged from the straightforward “What is a synagogue?” and “What is Hebrew?” to the philosophical “Had Hitler not lost the war would he have come to Indonesia and killed us?” The inevitable question arose about conspiracy theories that the Holocaust never happened. Before I had a chance to reply to this question, one of my students named Radit responded, “But look at all this proof!” It was one of the prouder moments of my year.

I added the following:

Sometimes history is difficult to accept because it is just too embarrassing or painful. Sometimes we do not want to believe humankind is capable of such things as the Holocaust. A sad corollary to historical examination is sometimes the desire to forget rather than admit to the truth of a heinous act or event. But ultimately, I explained, it would simply be dishonest and counterproductive to try and push it aside or create false narratives. It is only by admitting to our mistakes that we can then correct and learn from them.

Was the lesson groundbreaking? Hardly. Did my students walk away changed? Who knows? I would like to think that maybe one of them will have a thoughtful discussion with the student I just noticed walking by as I write this ending. She has a swastika doodled on her arm.

About the author: Sarah Brafman is a Fulbright English Teaching Assistant based in Parung, West Java. She graduated from Columbia University with a degree in history. Prior to living in Indonesia, she worked as a paralegal in the New York County District Attorney’s Office. Contact her at sarah.j.brafman@gmail.com.

One thought on “No, Hitler is not cool: Reflections on teaching my Indonesian students about the Holocaust”