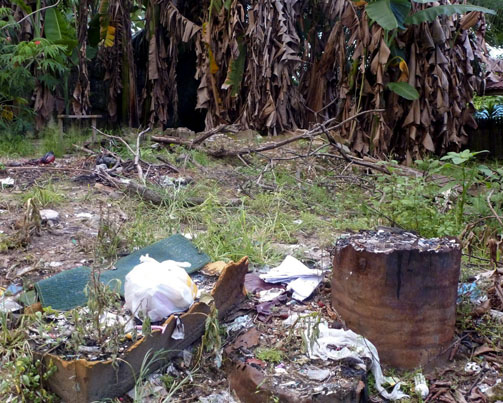 Devoid of waste management or recycling centers, trash can be found littering the ground and clogging up drainage systems all across Indonesia. Here, plastic debris populates a wooded area in rural Samarinda, East Kalimantan. (Emily Prengaman/Indonesiaful)

Before I lived in East Kalimantan, I worked at High Trails, an outdoor science school in the mountains of southern California.  Each week, buses of 5th and 6th grade students drove up into the San Bernardino National Forest for a week of learning about science as it actually happens around them. To this day, I can’t think of a better way to get a student interested in the natural world. I just wish we could have kept them there for more than a week (well, most of them) so they could have learned what I learned in a year and a half at High Trails. Instead, I distilled my lessons down into key points about the heart rate of a hibernating squirrel, how a platypus feeds it babies, and the idea that everybody shares the responsibility of taking care of the environment.

Speechifying about environmentalism was a big part of the job. I took kids to trash-covered parts of the forest and showed them lots of depressing pictures of polar bears watching their homes melt away. Every week, we got dressed up in silly costumes and acted out Dr. Suess’s The Lorax – surely an epic, yet heartwarming, tale if I’ve ever heard one. We were, of course, not entirely paradigms of green living. I drove a car on weekends, sometimes just so I could buy clothes made cheaply by underpaid workers in the country I now happen to be living in. But we tried.

I look around Samarinda, my current home, and it is hard to believe that anyone is trying. There is trash everywhere. Plastic wrappers and bottles pile up along the sides of the streets and they clog up the drainage rivers around the city. Outside of the city, things get worse.  That’s where the big companies (many of them foreign) are cutting down trees, strip-mining forests, and pumping out tons of oil every day. Samarinda’s famous river dolphin is nearly extinct. Not a single one of my students has ever seen one.

Everyone is aware of the situation. A few weeks ago, the focus of our English classes was on the environment and sustainability. My students already knew all the buzz words. They knew about the issues. All of my students agreed that the government should do more to protect endangered species; they believe that air pollution is a problem in their city; they think recycling is important.

There are people and organizations working to counter these issues. There are NGOs dedicated to protecting Kalimantan’s biodiversity. My neighbor works for the Indonesian government’s forestry department and works on projects that focus on reboisasi – replanting trees.

In the past few decades, lots of people have moved to Kalimantan because it is not as crowded as other parts of Indonesia (i.e. Java). There are jobs here because there are so many resources. There isn’t nearly as much poverty as I’ve seen in other parts of the country. I work at a nice, well-funded school. My students have BlackBerry phones. Their parents have cars.

Samarinda, the capital of East Kalimantan, sits along the banks of the Mahakam River on the island of Borneo. (Emily Prengaman/Indonesiaful)

But outside of the city, some farmers are experiencing record-low yields, likely because of the polluted water they use to water their crops. People get sick because of pollution in the water and the air. At the same time, people are also making more money so they can afford access to better health care and food from other places. Still, the former group doesn’t always benefit from these advances.

It is frustrating. I don’t know what people can do without better infrastructure. I don’t know how they’ll build up recycling programs or water treatment programs or public transportation without a government that is more responsive to those issues (and less corrupt). And every time I think about it, I remember that I feel the exact same frustrations when I’m home in the U.S.

I don’t have a feel-good ending for this post. I don’t drive a car anymore, but I fly on airplanes all the time. Most of my food is grown locally, but it is certainly nowhere near organic. Is the answer to return to science camp tucked away in that quiet oasis in southern California? Or will this year’s harsh environmental realities propel me to take more direct action? For now, I’m going to think about what to do with the three plastic bags full of bottles in my house, because I can’t yet stand to burn them in the fire pit in my front yard.

About the author: Emily Prengaman is a Fulbright English Teaching Assistant based in Samarinda, Indonesia. She graduated from Carnegie Mellon University in 2009 with a dual degree in anthropology and fine arts. Prior to living in Indonesia, she was an instructor at an outdoor science school in southern California.

One thought on “Facing harsh environmental realities in East Kalimantan”