In eight months of jungle living, nothing has challenged, provoked, and inspired me quite like this diorama, carefully constructed by Nurul, one of my best students, for a national English-speaking competition in Jakarta. 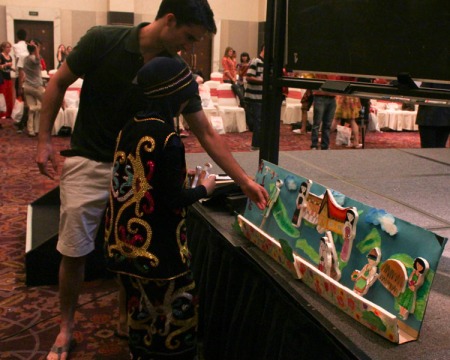 A cardboard backdrop offers a 2D map of Indonesia. Popping out from each island, 3D Styrofoam cutouts display that regions’ houses/people. The diorama was Nurul’s homage to the Indonesian motto Bhinneka Tunggal Ika, or “Unity in Diversity.” (Anna DeVries/Indonesiaful

Made from a handful of basic crafts, the diorama is a proud, styrofoamy display of Indonesian sovereignty.  Long before going national, it was the pride and joy of SMAN 10 Samarinda, rousing “oohs” and “ahhhs” from every corner of every room.

Nurul’s one, fundamental mistake was placing the diorama’s fate in the hands of her less than capable English Teaching Assistant. My own body rarely leaves the hot, crowded chaos of Indonesian airports without releasing some combination of blood, sweat, and tears, but soon I would need to get this diorama, unscathed, to Jakarta via Lion Air.

For those still blissfully unaware, the Lion Air terminal at Balikpapan International Airport operates with about three times the inefficiency of JFK at its worst. It is the antithesis of my students’ inspirational masterpiece. There is pushing, moshing, smelliness, delays, danger, and arbitrary rules (one friend was informed that women are forbidden to sit in an exit row, as per Lion Air policy, yet sat in multiple exit rows on future flights with no objection).

Before braving Lion Air, Nurul and I would enjoy a bumpy, 3-hour bus ride to the airport — nearly sufficient time to learn a new vocabulary word, duta besar or “ambassador.” My plan — convincing airport personnel that Nurul’s diorama is a gift for “duta besar Amerika” — was only the whitest of lies. After all, the ambassador would attend that evening’s welcoming dinner, and the Fulbright ETA program is indeed funded by the U.S. State Department.

Shortly after adding ‘duta besar’ to my modest word bank, we arrived at the airport, and Nurul’s diorama, gently wrapped in that morning’s newspaper, was exposed to a new type of jungle.  The three of us — Nurul, the bule, and the diorama — were greeted with staring, pointing, leering, and uninvited foto-foto, gestures to which I had regrettably grown accustomed. And yet, for Nurul, these social obtrusions were a first.  As fellow prey, I empathized with the vulnerability and aggravation she was feeling, and having miraculously struck common ground with a 14-year-old girl from Kalimantan, I thought better than to verbalize my snobbish and complacent thoughts (mainly, “try dealing with this every day!”).

Nurul and I, united in mutual frustration, made our way to the gate and prepared to board. Within seconds, the routine pushing and shoving forced me to forfeit a couple of spots in “line,” exposing my student and her diorama to the crowd of careless lions. From afar, I spotted 4’10’’ Nurul hugging her massive diorama with both arms. She soon reached the woman in charge of ticket stubs, who longed to be anywhere else but that gate.

That is, until her eyes caught the diorama.

Nurul uses her diorama as a prop during an English contest organized by the American Indonesian Exchange Foundation (AMINEEF) in Jakarta. (Dustin Volz/Indonesiaful)

Hiding her nosey curiosity under the guise of professional skepticism, the ticket woman threw out an arm, stopping a silent, trembling Nurul.

(What is inside there? You have to open it or you cannot board.)

It was finally here — the opportunity to defend my petrified student, to rise against the abusive faux pas of Lion Air and this accursed airport, and above all, to defend the diorama which, in the midst of all that is evil, stood for all that is good.

Surging with newfound purpose, I leaped over, under, and around the sea of people. Throwing one long arm in between Nurul and her predator, I protested:

Ohhhhhh no, no, no, no. Ini untuk duta besar Amerika. Tidak ada masalah.

(This is for the US Ambassador. There is no problem.)

For added effect, I flashed an AMINEF ‘Emergency Contacts’ card, my makeshift badge. Somehow, my ambiguous authority trumped hers. Nurul and I were ushered forward without further complaint.

But greater foes awaited the diorama. Moments after ushering Nurul to her seat, I glanced up at our full carry-on compartment (the diorama had been carefully slid inside, on top of all other luggage). My eyes met the belly button of a round, stubborn gentleman who had begun to smash his luggage into our full compartment.  Repeatedly, he struck the diorama, as though crushing it would be a perfectly suitable way to accommodate his monstrous cardboard box.

I was too appalled to speak Indonesian, and I certainly didn’t have the vocabulary to do this grave offense justice. So I remained seated, shooting him the most menacing glare I could muster. Then I pointed: first at him, then at his seat three rows back.  This informed the gentleman that the diorama he was intentionally destroying belonged to a party that was not going to let Lion Air win. With a forcibly cute and innocent smile that reminded me of my misbehaving 10th graders, he waved and bobbed at me for about 5 seconds, then shrunk into his seat.

By the time we landed, I think the importance of Nurul and her diorama had circulated throughout the plane. Nonetheless, I wasted no time, shooting up just as the wheels touched down. Utilizing the lankiness of my arms and legs, I formed a two-row protective barrier, through which Nurul and diorama could exit in peace.  Perhaps it was the goofy ridiculousness of that protective gesture, but the only response to my craziness was the smiling, patient obedience that Nurul’s diorama deserved.

Exiting the plane, we were finally, against all odds, home-free. After a short ride from a considerate taxi driver, we arrived in front of Jakarta’s Hotel Gran Melia to a welcoming burst of air conditioning, diorama intact. 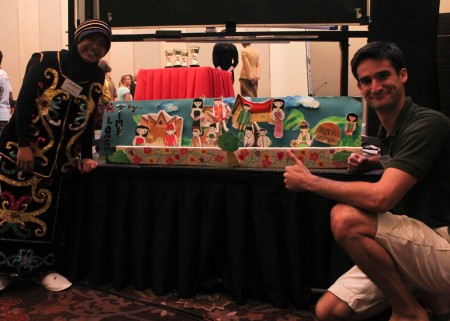 ETA Peter Renehan poses with his student, Nurul, in front of her diorama made for a national English competition at the Gran Melia Hotel in Jakarta. (Anna DeVries/Indonesiaful)

Safe at last, my student dropped her guard for the first time that day, and proceeded to have what she would later call “the most memorable experience of (her) life.” In three days, she enjoyed her first flight, her first trip off Borneo, her first time in a hotel, and her first bite of pizza. I’m not sure I’ve ever been so proud of another human, and by the end of the weekend, I think I would have taken a beating for that diorama.

As I am writing this, I feel the moist breath of an Indonesian man on my shoulder. Through my computer’s reflection I am reading a face of intense curiosity (or disgust?), as if I myself am a massive diorama plopped in this seat for his personal amusement. Despite what I really mean, I’ll probably portray whatever this subjective observer cares to see. I inspire innocent curiosity, admiration, and even disgust.

As a white foreigner, such obtrusive behavior is often inevitable, so my life in Indonesia carries with it an inherent vulnerability. And with no lanky, bule protector to push, shout, point, and lie me to safety, I guess I just have to focus on the multitude of “dioramas” I encounter every day. They are students, adventures, and relationships — small but bright lights that, even on the darkest days, remind me that I still care.

About the author: Peter Renehan is a Fulbright English Teaching Assistant based in Samarinda, East Kalimantan. He graduated from the College of the Holy Cross in 2012 with a degree in chemistry. Following the Fulbright, he will begin pursuing a medical degree at Harvard. Contact him at prrene12@g.holycross.edu.