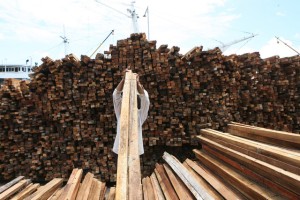 Timber piled in Jakarta’s Sunda Kelapa Port illustrates the quantities of wood flowing out of Indonesia each year, prompting questions of illegal logging and mismanagement of the forest industry. (Dimas Ardian/Bloomberg)

Abbott, who campaigned on stiffer immigration policies during this year’s election, does not want to continue the constant influxes of refugees to his continent-state. But, with many ships already at sea, it is impractical – and questionable morally – to stop in-take. Thus, with the Edward Snowden leaks of Australia spying on Indonesia still fresh in the mind of officials, both countries are struggling to come up with a deal.

The Indonesian economic policies continue to befuddle international onlookers. Indonesia’s central bank raised its key rate to 7.5 percent, the highest since 2009. In a recent poll by Bloomberg, only one out of 25 economists predicted the change; 24 predicted no change at all.

Recent revelations by Human Rights Watch have shown forest misue in Indonesia costs Indonesia about $7 billion in revenue every year (while not even accounting for smuggling): a number more than the national healthcare budget. This is not to even mention the proposed legislation to ban alcohol nationwide, which would severly damage the tourism industry – and especially the local economy of Bali and Lembok.

“Abbott refuses to rule out taking more refugees from Indonesia” by Katharine Murphy and Oliver Laughland, The Guardian; http://www.theguardian.com/world/2013/nov/12/indonesia-australia-refugee-people-swaps

Indonesia and the United States

“US Engagement with India and Indonesia below its potential” Sahara Samay; http://www.saharasamay.com/world-news/676542076/us-engagement-with-india-indonesia-below-its-potential.html

So, do you think drinking beers in Bali is going to be a thing of the past? Do you think the recent key rate increase will improve a lulled economy? Do you think Indonesia and Australia will come to an agreement this upcoming week?