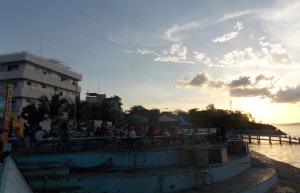 Kupang Harbor, where many local residents gather with friends to watch the sunset. (Nick Hughes/Indonesiaful)

One night I was enjoying a beer while watching the sunset by the harbor near my house. I had met some of my students there, so I sat with them while they ate bakso (a hot meatball soup) and drank Pepsi. An elderly woman sat down next to us and began listening to our conversation. She was quiet mostly, but would echo me when I said a familiar word — I was speaking a mixture of English and Indonesian with the students.

When it was nearing dark, my students excused themselves and made for home. After they had left, the woman put her hand on my arm and motioned to the bakso a man was eating next to us. At first, I naively thought she was asking me if I wanted some, and I said I wasn’t hungry. When she said in English, “A dollar, please give me,” I knew she was asking for money for herself. After realizing this, I followed my first gut reaction, got up, and left.

I walked home in a stupor encroaching on somnambulism, nearly getting run over while trying to cross the street. My mind was racing, and I tried to collect my thoughts. I have not yet gotten used to being asked for money since living in Kupang, because, well, I have rarely been asked for it here. Occasionally a student will ask me for 5,000 rupiah, and when this happens in the presence of my counterpart teacher, he warns me not to give the student anything. As he says, if I give one student some money, word will spread and I will soon be overwhelmed with requests. I was heeded this same warning at our orientation. I adapted this ethos as my attitude towards these types of situations upon arriving in Indonesia, because it paralleled the limited experiences I have had with real poverty up to this point in my life.

As a white man, I am immediately identified as an outsider in Indonesia. Several different people here have told me that most Indonesians also assume that because I am an American, I am rich. Although I wouldn’t consider this to be true at home, in the context of Indonesia, I truly am wealthy in comparison to most people. However, as I mentioned above, I haven’t yet experienced many locals trying to gain personally from my relative wealth. I’m sure it is different in parts of Indonesia that see westerners regularly, but most people I have met in Kupang genuinely want to meet me or simply practice their English. In fact, most Indonesians I have met will go out of their way to ensure that I am well-fed and taken care of. This incredible hospitality highlights a major irony of Indonesian culture — everyone here is so concerned with making sure you feel comfortable, that you can forget just how hard life is for some Indonesians.

This is a topic that warrants more discussion than a single short post. The woman asking me for money stands as a stark reminder of the huge gap in wealth between my monthly stipend, which most Americans would consider small, and most Indonesians’ incomes. This experience brings to light the mainly selfish motivations that drew me to Indonesia and have navigated me since my arrival here, and also raises many questions for me about my role here as an English Teaching Assistant and “cultural ambassador.”

One part of me asks: Was the beer I bought really worth more than buying that woman dinner?

I see now that the answer to this is quite obviously no.

Another part of me asks: With my limited income, how much can I really do for the millions of Indonesians who live in poverty?

This is a question to which I don’t yet have an answer, and I don’t think I will anytime soon.

Looking back, I wish I had bought her some bakso.

About the author: Nicholas Hughes is a Fulbright English Teaching Assistant in Kupang, East Nusa Tenggara. He graduated from Rutgers University in 2013 with a double major in English and Anthropology.

One thought on “An incident at Kupang Harbor”