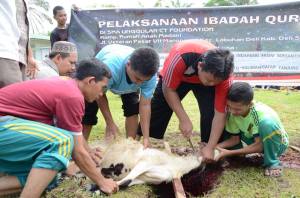 A goat prepared for a halal slaughter.

Eid al-Adha, more commonly known as Idul Adha in Indonesia, is the Muslim holiday which honors Abraham’s willingness to sacrifice his son Ishmael. In Indonesia, Muslims usually celebrate by sacrificing cows and goats, and partaking in other festivities on Idul Adha. The meat from these animals is then distributed with two-thirds of the meat being kept by the family and friends of whoever paid for it, while the remaining third is given to the local poor. Last year, I spent Idul Adha at SMAN 2 in Palangkaraya, where Idul Adha was celebrated, but with substantially less fanfare than it was at my school this year, SMA Unggulan CT Foundation (CTF) in Medan. This is a private school for exceptionally gifted low-income students from North Sumatra. Except for a handful of staff members, everybody at CTF is a very devout Muslim which most likely explains the extra fervor this year.

The entire community assists in butchering the meat.

Originally, I had intended to join my students for early morning events on Idul Adha as they wake up early to prepare for an event that takes all day. Unfortunately, I slept poorly the night before because I live next door to a mosque, which was full of worshippers who spent the night chanting prayers and beating drums. Thus, I did not wake up until mid-morning, by which time other teachers and guests had already arrived to partake in the festivities. The primary activity for Idul Adha, at least at CTF, is the sacrifice of cows and goats, which are subsequently cut into meat pieces that are distributed to the aforementioned family, friends, and the poor.

The cows and goats were a gift from the school’s benefactor, Chairul Tanjung, with the exception of one cow which was paid for by contributions from all of the school’s Muslim teachers. The actual killing of the animals was done by professional butchers, who then gave out large chunks of meat to eager students and a few teachers who volunteered to cut the meat into smaller pieces. This process is much harder than it looks as I soon found out from my attempts to help, which resulted in poorly-cut and disproportionate chunks of meat.

Individual portions of meat are parceled out and shared with family, friends, and the poor.

Our Idul Adha lunch consisted of goat satay, which was marinated in a delicious, almost American barbeque-like, sauce. Each teacher was given a certain amount of meat, which one of my co-teachers graciously offered to help convert to rendang, an extremely delicious Indonesian spicy meat delicacy. The rest of the meat that was not distributed to the poor was kept by the school cafeteria staff, which cooked various beef and goat meat dishes for the following week. In the evening, I joined one of my co-teachers who made mouthwatering sop buntut, or oxtail soup, for dinner.

Before coming to Indonesia, I would never have imagined that I would take part in a celebration like Idul Adha. Muslims make up less than one percent of America’s population, so I, like most Americans, have never attended nor been invited to Idul Adha celebrations in the US. As cultural ambassadors in Indonesia, one of our primary jobs is to teach people at our host site about America, but it is vital for us to learn about our host culture as well, so we can develop a deeper understanding and can better educate our fellow Americans about it. Thus, I am blessed that my school allowed me to not only observe, but also to join in such a unique and interesting tradition, even though I am an outsider.

Christopher Linnan is a second year Indonesian Fulbright English Teaching Assistant (ETA) placed in Medan, North Sumatra at SMA Unggulan CT Foundation. Last year, he taught at SMAN 2 in Palangkaraya in Central Kalimantan. He graduated from Emory University in May 2014 and enjoys sports, eating candy, and solving his Rubik’s Cube.

One thought on “Idul Adha in Medan”