In Greek mythology, there are three (i) creatures called the Sirens who reside on the rocky island of Anthemoessa together. They lure passing sailors with their gorgeous voices and beautiful melodies, but when the seamen reach the island, they are shipwrecked. Economic protectionism is no different, as it offers the tantalizing promise of economic growth through domestic self-reliance, but more often than not this is simply an illusion. Countries that adopt protectionist policies usually suffer the consequences of having a shortage of skilled workers, the eventual retaliation from foreign nations affected by these policies which often result in economic warfare, and worst of all it threatens to create a domestic and international atmosphere of intolerance for people from other countries, religions, etc.

Yet, protectionism remains a response to economic crises all over the world because of its populist appeal. It is much easier to blame foreign countries and companies for economic misfortune than to focus on internal domestic problems. Since the Financial Crisis of 2007-8, many countries have adopted protectionist policies as a response. (ii) Indonesia is among these as it has experienced a surge in protectionism that can be traced back to the former President Susilo Bambang Yudhoyono’s attempt to renegotiate mining contracts with foreign companies, which has manifested itself in increased scrutiny of foreign companies and workers, import restrictions, etc. (iii) Thus, this article will examine the surge in Indonesia’s increasingly protectionist policies, their economic impact, and it will look at how Indonesian policy makers have reacted to past economic slowdowns.

Any foreigner who has ever had to acquire any type of extended-stay permit in Indonesia can attest to how nightmarish the process can be at times. One needs letters from various Indonesian government ministries which are often slow and reluctant to issue them, countless trips to the local immigration office, etc. Unfortunately, this process has become even more burdensome recently as the number of foreign workers in Indonesia has been steadily decreasing for the past few years as demonstrated by the graph below. (iv) 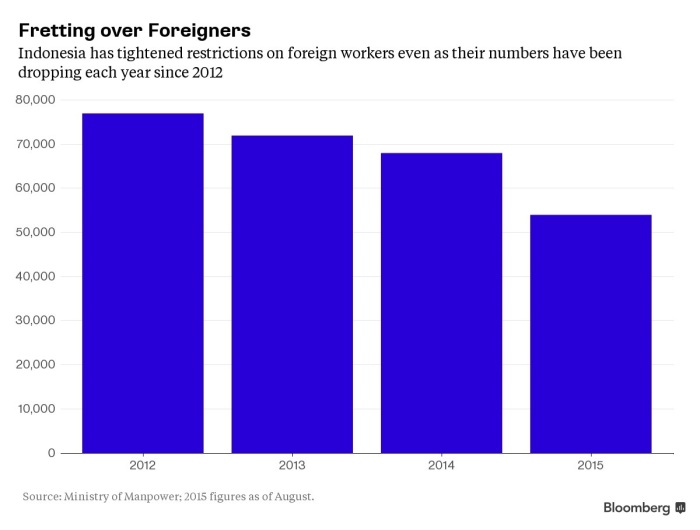 Companies in Indonesia that hire expatriate workers are now required to hire ten Indonesians for every foreigner (v) and Indonesian government ministries have introduced new regulations to make the process of acquiring a work visa for foreigners lengthier and more complicated. (vi)

The origins of the surge in protectionist policies in Indonesia can be traced to the aforementioned former President Susilo Bambang Yudhoyono’s response to the 2007-8 economic crisis, but the lure of protectionism did not subside when he left office. The last Indonesian presidential election was full of nationalistic and protectionist rhetoric as then-candidate and current President Joko Widodo said “’every country has barriers … (we can) make it a bit more difficult for foreign investors.’” (vii) His administration has fulfilled its promise as it has been responsible for import restrictions and quotas as documented in a previous Indonesiaful article and the aforementioned new regulations making it extremely difficult to hire foreign workers. (viii) For example, Indonesia has “’the most stringent conditions that are applied for English [expatriate] teachers in the world, hands down,’ said Nina Wexler, an American who owns two schools in the city of Solo. ‘Out of 100 applicants, maybe five qualify. And chances are they will end up taking higher-paid jobs in other countries.’” (ix)

It is perfectly understandable that Indonesia is wary of foreign workers and companies after the long Dutch occupation. One can make a reasonable argument that is makes sense to restrict the number of unskilled foreign laborers Indonesian companies can use as these workers compete with and depress wages for unskilled Indonesian workers, while providing little-to-no benefits for Indonesia, especially if they are only temporary workers. However, recent economic history has demonstrated the clear benefits of hiring highly-skilled foreign workers, if there is a domestic shortage. Unfortunately, Indonesia has an educational system that the Organisation for Economic Co-operation and Development (OECD) ranked 64th out of 65 countries surveyed for fifteen year-olds’ achievements in math, science, and English. (x) This bodes ill for any plan to rely solely on skilled local workers. Having taught at two Indonesian high schools, I can personally vouch for the brilliance and potential of Indonesian students, but the national and local governments have to commit to improving its educational system and infrastructure first.

Singapore today is far from being a “poor little market in a dark corner in Asia.” Photo credit to Emily Masters.

For example, I wrote about this in a more in-depth previous Indonesiaful article, about Singapore, one of the few countries to successfully transition from a developing to developed country, and was once labeled as that “poor little market in a dark corner in Asia by former Dutch economist and Singapore’s long-time policy advisor Albert Winsemius.” (xi) Yet, today, it is a “world business capitol, where per capita gross domestic product is similar to that of the U.S.” (xii) It achieved this through a variety of ways, but chief among them was and remains importing skilled workers from abroad. (xiii) These foreigners transferred skills and knowledge to Singaporean workers, as well as bringing foreign investment with them. (xiv) As Singapore developed its educational system, it steadily improved due to the commitment and efforts of its central government, and today, its schools rank among the world’s best, which allows its citizens to compete for the same jobs in Singapore and around the world.

Indonesian trade minister Tom Lembong recently acknowledged that every expatriate worker creates three to twelve jobs. (xv) This is in addition to the skills that they will transfer to their Indonesian co-workers. John Kurtz, director of the Indonesian operations of consulting company A.T. Kearney points out that “’what the government sometimes doesn’t realize is that every employer would much rather have qualified Indonesians than hire expatriates,’ said Kurtz. ‘For many many reasons, cost among them.’” (xvi) In an ideal world foreign companies could choose from a large pool of qualified Indonesian candidates, but if this is not the case they will look to import workers from abroad. Opening Indonesia’s economy will have long-term benefits for Indonesia’s youth as it will spur economic growth and create jobs.

Indonesian’s youth remain big fans of Western companies such as Nike, Kentucky Fried Chicken, Twitter, etc. However, according to a U.S. Chamber of Commerce survey conducted last year, a majority of Indonesians ages sixteen to twenty-five believe “foreign companies exploit Indonesian resources” and “the government is too lenient on foreign companies,” while seventy-two percent of those surveyed said “Indonesia should be more nationalistic when it comes to the economy.” (xvii) If countries truly want to be “nationalistic when it comes to the economy,” it makes more sense to develop human capital, so that Indonesia’s youth can compete in today’s globalized economy. Unfortunately, the response has been to attempt to erect barriers for foreign companies that wish to do business here. However, this stands at odds with Indonesia’s own recent economic history.

In the past, economic downturns in Indonesia have led to economic policies that have benefitted Indonesia long-term. (xviii) This is illustrated by the graph below, which traces Indonesia’s income per capita relative to the U.S. from 1960 to 2011 to illustrate that major economic crises in Indonesia have typically resulted in pro-free market reforms meant to encourage foreign direct investment (FDI), while upturns have resulted in the opposite. 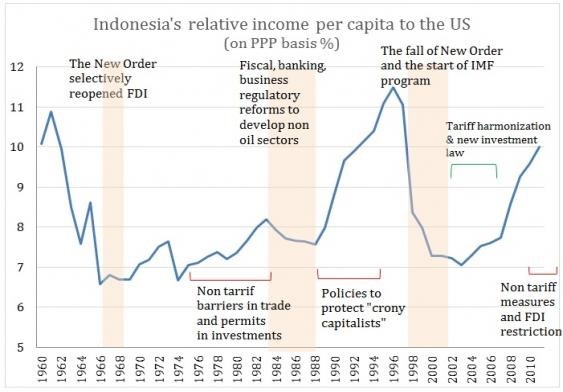 Events such as the 1980s and the 1997-8 Asian Financial Crisis resulted in broad economic reforms that loosened trade protectionism. (xx) For better or worse, globalization means that isolating one’s country from the rest of the world is a worse idea now than ever before. For example, a one percent contraction in European Union gross domestic product (GDP) would lead to a similar, and possibly larger negative effect on Indonesian food and beverage exporters. (xxi) There have been promising signs of a shift in policy as President Jokowi pledged to join the Trans-Pacific Partnership (TPP), Indonesia is scheduled to join the ASEAN (Association of Southeast Asian Nations) Economic Community in December, and several new government ministers, most notably the aforementioned Tom Lembong have made efforts to cut red tape. However, the coming months and years will continue to test the resolve of policymakers.

Indonesia is not the only country struggling to decide to what extent it should protect its economy from foreign competition as the European Union is in crisis as the experiment of one Europe united by a single currency and central bank has been proven shaky at best, the American presidential race has been full of heated rhetoric about foreign competitors such as Mexico and China, etc. Thus, while many of the world’s citizens are understandably apprehensive and upset about the effects of opening their domestic economies, there can be no greater error than attempting to isolate one’s own country from the rest of the world. While protectionist policies may be well-intentioned, the results are usually bad. Thus, it would behoove policymakers in Indonesia and around the rest of the world to resist the lure of protectionism and remain committed to free-market principles.

Christopher Linnan is a second year Indonesian Fulbright English Teaching Assistant (ETA) placed in Medan, North Sumatra at SMA Unggulan CT Foundation. Last year he taught at SMAN 2 in Palangkaraya in Central Kalimantan. He graduated from Emory University in May 2014 and enjoys sports, eating candy, and solving his Rubik’s Cube.

(i) Traditionally there are three sirens, but there are some stories with more or less.