Every year, Indonesiaful features current Fulbright English Teaching Assistants (ETAs) wearing traditional clothing from across Indonesia. This year, we will continue this tradition by featuring members of the 2016-17 ETA cohort.

While Indonesia is a vast country, the most famous fabric is batik. Batik is most closely associated with Javanese culture. Traditionally, batik is created by drawing wax patterns on fabric and soaking it in dye. The waxing and dyeing process is repeated with the wax used to preserve the color of the previous dye until the final design is complete. Finally, the wax is boiled away and the finished product, a dazzling design in different colors, is revealed. Nowadays machine-printed batik (batik printing) is much more common, though traditional hand-craft workshops where artists draw by hand (batik tulis) or use stamps (batik cap) still exist too. Note that batik refers to this process and not the actual fabric itself.

However, there are many types of fabrics in Indonesia besides batik. Through the images below, join these ETAs and explore Indonesia through its clothing. Featured are pieces from the small towns of Northern Sumatra to the grasslands of Sumba and many places in between.

Daniel Gerardi, currently living in Balige, North Sumatra, is wearing formal Batak clothing. Batak refers to a variety of ethnic groups native to North Sumatra. Daniel’s shirt is a typical Batak design and the fabric draped over his right shoulder is of particular significance among the Batak community. This kind of woven fabric is known as Ulos. There are different types of Ulos meant to be used as part of different ceremonies. The one pictured here is Ulos Sirara, worn by Batak men to weddings and funerals.

Mackenzie Findlay is posing in a tailored shirt made from fabric from Central Kalimantan. This fabric is also called batik, though it is a more modern printed variety. The motif depicts symbols of Dayak culture. Dayak is a term used to refer to the many tribes of people native to Kalimantan, also known as Borneo. Mackenzie’s batik predominantly features a shield, although other popular motifs include the image of a traditional Dayak house and birds native to Kalimantan. 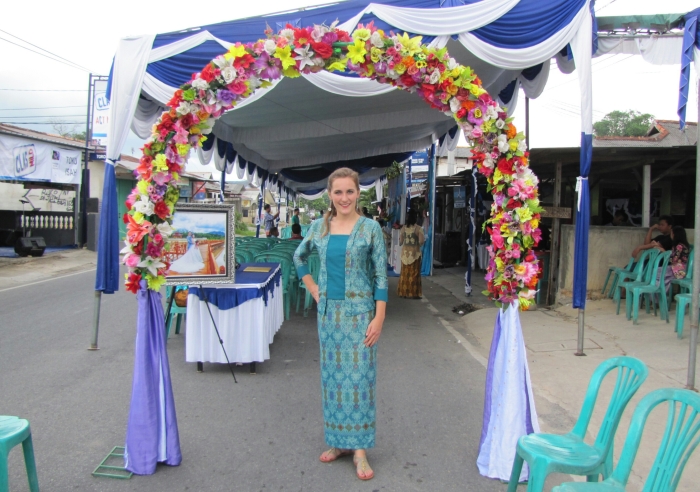 Kelly Fitzgerald is standing at the entrance to a friend’s wedding wearing a complete batik outfit. The fabric for this outfit is from Kalimantan and is printed batik with shiny accents. It was a birthday gift from her neighbors in Pangkal Pinang during her first year in Indonesia. Using the fabric, she had a modern kebaya and matching skirt made to be worn as formal wear. A kebaya is a style of blouse for women that are most often associated with Javanese culture. Now that Kelly lives in Surabaya, East Java, she earns much praise from her new friends whenever she wears it to weddings or parties. Kayla Stewart is wearing a batik skirt from well-known Indonesian store, Batik Keris. Kayla bought the skirt early on in her first semester at SMKN Jawa Tengah before finding a local tailor in her Semarang neighborhood. The skirt is a staple in her weekly school teaching uniform.

Julius “Jukie” Tsai is modeling Javanese batik with a cultural motif. The figures on his shirt are Semar and Gareng, characters from the Mahabarata that are featured in Javanese shadow puppetry. These shadow puppets are called wayang kulit because traditionally the puppets (wayang) are made from leather (kulit) and elaborately decorated. In Java, especially in Central Java such as Jukie’s town of Magelang, wayang kulit characters of often featured in everything from batik patterns to logos for food stalls.

Although Krupa Patel purchased this batik fabric in Bandung, West Java, the floral motif is generally more closely associated with Central Java. She had this piece tailor-made and frequently wears it while teaching at SMA Khadijah in Surabaya. 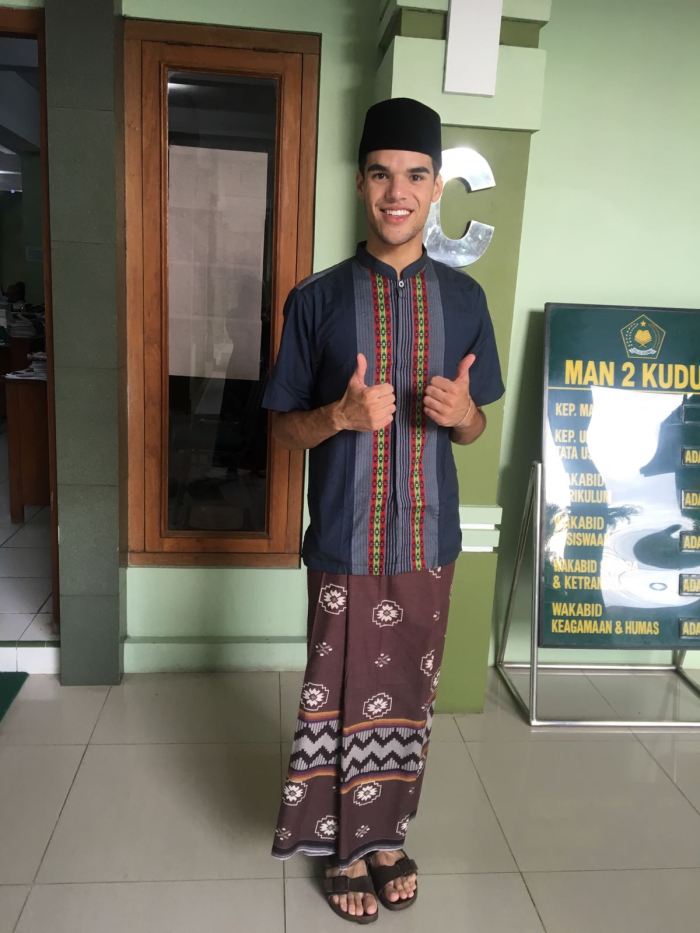 Grant “Vinny” Owen wears a sarong, baju koko, and peci in his daily life in Kudus. This is a typical outfit worn by men in Indonesia, particularly in Java, that is associated with their Muslim identity. This outfit is typically worn to the mosque or at any religious event. In Kudus, the sarong [skirt] and peci [hat] are worn in the community as daily wear. The peci is traditionally associated with Islam, but non-Muslim men may also wear it. Although Vinny is not Muslim, he regularly wears this traditional outfit because he teaches as MAN 2 Kudus, an Islamic high school, and because the surrounding community is predominantly Muslim.

Karawang (sometimes spelled kerawang) is a type of hand-made fabric that is unique to Gorontalo in northern Sulawesi. JoAnn Doll, currently living in Gorontalo, is wearing an example of this fabric. Karawang refers to the hand-stitched embroidery that is typically a floral motif but designs vary by village. Fabric is usually a solid color, although combinations of batik and karawang are increasingly popular. Karawang is typically worn as formal wear and can also be part of a uniform such as those worn by teachers at schools across the province. Clothes completely embroidered with karawang are very expensive because they are hand-made. Small items with accents of karawang such as scarves and fans are common souvenirs from Gorontalo.

Kate Barton is wearing the teacher uniform that she helped choose for the English teacher department at her school, SMAN 4 Kendari, in Southeast Sulawesi. The teachers wear it every Friday as part of their school uniform.

Shelby Lawson is modeling traditional clothing from Kendari, Southeast Sulawesi. This shirt is the Thursday uniform for teachers at SMA N 7 Kendari. As with most uniforms in Indonesia, this shirt was designed and made specifically for Shelby. The pink trim is unique to Southeast Sulawesi and is still handmade in the region. Historically it could only be worn by members of the royal family, but now it has gained popularity among the masses. 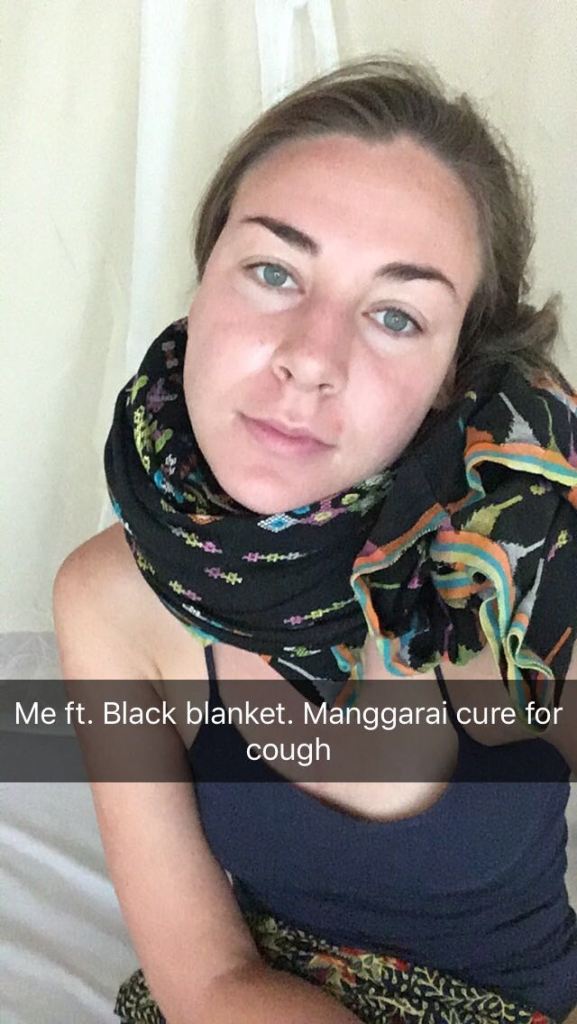 In Flores, songke has many cultural uses. It can be worn as formal wear for weddings, it is the costume of choice for caci whip dancers, and it is even believed that wearing the fabric tightly around one’s neck while sleeping will cure a cough and other ailments. Songke is a woven fabric native to the Manggarai region of Flores and is traditionally made of black cotton woven with brightly-colored designs. Each piece of fabric takes about one month to complete and features one of nine traditional Manggarai motifs. The motif worn by Sam Geary is called mata manuk, which means chicken eyes in bahasa Manggarai. This name refers to the local belief that chickens have keen foresight and know when the tides are changing or when enemies are around. Today, you can find songke made of different materials and in other colors, but the original style is still quite popular.

Julianne O’Connell is posing in a tailor-made dress featuring accents of ikat fabric from Sumba, East Nusa Tenggara. Unlike batik, ikat fabric is woven, not printed. Ikat is typically made of cotton and since it is woven, it tends to be thicker and warmer than other fabrics in Indonesia. The motif in the yellow lines on the front of Julianne’s dress feature an outline of the traditional house of Sumba, called Uma Bokulu.

Can’t get enough Fabrics of Indonesia? Then check out Part 2 from 2016 and the Original from 2015 to see more!

6 thoughts on “Fabrics of Indonesia: Part 3”