Every month, Fulbridge interviews an *ETA from around the world to get a glimpse of what life is like in different placements. This month, Dakota Ross-Cabrera, 2016-17 ETA in Spain and one of Fulbridge’s Spain Country Representatives, talked with Jeremy Dela Cruz, current ETA in Andorra. 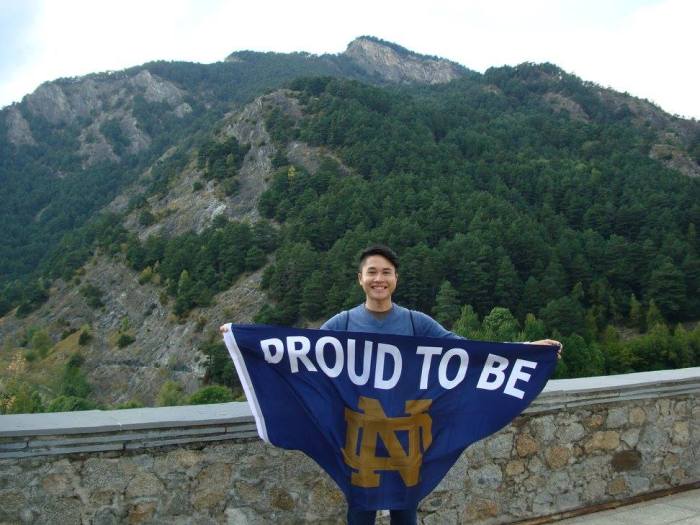 Jeremy graduated from the University of Notre Dame in 2016, where he studied French and philosophy.

Q: Why did you choose Andorra?

A: Since I have family living in Barcelona, I decided to take a Catalan course during my final semester of senior year. I enjoyed the class and figured what better way to improve in the language than by applying for a Fulbright grant in the only country that has Catalan as its official language: Andorra, the Principality in the Pyrenees. I was also attracted by the nation’s cultural makeup and unique political system consisting of a parliament influenced by two Co-Princes (a Spanish bishop and the president of France).

Q: Where are you located and what school/university do you teach at?

A: Although I live in the capital of Andorra la Vella, I teach at the Escola Andorrana de segona ensenyança d’Ordino, a school based in the northernmost parish of the country.

Q: Since every country ETA program has different requirements, what all does your grant entail?

A: Given that there are no research grants awarded in Andorra at the moment, all five Fulbrighters in the country are English teaching assistants within the Escola Andorrana system and implement an instructional curriculum developed by the Ministeri d’Educació. Besides its own national association of schools, Andorra is home to two other educational systems administered by France and Spain. We function as lector(a)s—the Catalan term for foreign language teachers who are native speakers—and perform the responsibilities of grading assignments, designing lesson plans, and collaborating with school colleagues (e.g., teachers, therapists, etc.). Fulbright grantees are assigned to staff secondary schools, a vocational training center, and the Universitat d’Andorra. The Fulbright Committee prefers applicants who have engaged in college-level study of one of the country’s principal languages: Catalan, Spanish, or French. It’s important to note that many students in Andorra will grow up to be trilingual due to the emphasis on language acquisition placed in the school system.

Q: What does a normal weekday look like for you?

A: During the week, I prepare lesson plans for each of the grade levels I teach in Ordino: 2n (8th grade), 3r (9th grade), and 4t (10th grade). I co-teach two sections of 2n and assist the teacher with presenting on aspects of American culture. 3r and 4t are divided into half groups and so I am able to engage with smaller class sizes. The Escola Andorrana system reserves Wednesdays as half-days for students so that teachers can have time to collaborate to develop a team-based approach to lessons.

A: I have had the opportunity to eat lunch with my younger students as a way to encourage them to practice English outside of the classroom and to get to know them as individuals. Outside of schoolwork, I take part in gatherings organized by the Language Club of Andorra, a community of expats from various countries who meet once a week to socialize and practice different languages. I have also participated in activities organized by the Buddy Programme and ongoing research projects based at the Universitat d’Andorra. A few of the Fulbrighters are active in the country’s colla de castellers, a human tower building group that competes in regional performances.

Q: What have been some challenges?

A: Andorra’s small size offers the perks of safety and close-knit communities but can be a bit underwhelming in terms of night life. Since the country lacks its own airport, we are free to choose to fly out of Barcelona or Toulouse but in doing so are also obliged to factor in three-hour bus rides to and from Spain or France whenever we travel.

Q: What have been some highlights?

A: I have enjoyed experiencing aspects of Andorran and Catalan culture such as la Calçotada, a green onion eating festival, and la Diada de Sant Jordi, a feast day involving the exchange of roses and books. We also had the pleasure to host a few ETAs from Spain during the impromptu and informal Andorra Spring Seminar.

Q: What was your best lesson plan?

A: My students and I had the chance to explore the U.S. electoral system and analyze each candidate’s positions in the weeks before the general election. I enjoyed seeing each student develop and demonstrate his critical thinking skills—a vital quality for the formation of informed and engaged citizens.

Q: What will you miss the most?

A: An element of Andorran life that I will miss—and one that I hope to bring back to the U.S.—is the national passion for language learning. While Americans are easily impressed with someone who speaks two languages, it is quite normal for Andorrans to communicate in three or four on a daily basis. Only in Andorra will you be able to order in French at a Chinese restaurant offering Spanish and Portuguese menus as the waiters resume their conversations in Catalan.

Q: Why should prospective grantees apply to Andorra?

A: I highly recommend Andorra as a Fulbright destination not only for its verdant landscapes and relaxed lifestyle but also for its multicultural population. The linguistic diversity of the Principality remains one of its hallmarks and proves to be a welcome feature for those who want the best of both Spain and France. If you enjoy hiking along forest trails, skiing down fresh slopes, and exploring a country to which few Americans have ever been (let alone know about), you should definitely consider serving as an ETA in Andorra!

*ETA is an acronym for English Teaching Assistant.