The 2017-18 cohort of English Teaching Assistants spent one week at their sites before returning to Jakarta for orientation. The short stint was a glimpse at their homes and schools where they will be teaching for the next nine months. Indonesiaful collected some of the most memorable experiences from each ETA’s first few days.

I attended a concert by “Vinculos Orkestra” from Spain with teachers and their families from my school. The band collaborated with musicians from the Batak Culture in the Lake Toba region.

I have found myself in a small town in East Java called Gondanglegi. The people here are all remarkably welcoming and have gone out of their way to make me feel at home. I played futsal (indoor soccer) with a handful of guys from my community and despite two clumsy feet I managed to score a goal. The picture below is the view from my porch. In my mind, the beautiful landscape that greets me every morning is Indonesia’s way of telling me she has already made me hers. 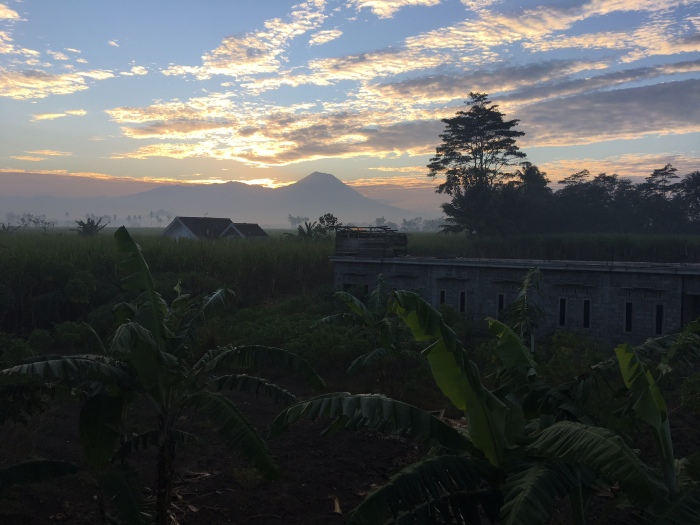 I attended my first Kendari celebration with my co-teachers. They gathered to celebrate and pray for one of their co-workers who will be going on the hajj to Mecca this month. The event was filled with delicious, traditional Indonesian food!

On the Saturday after my arrival, I was asked to speak in front of the entire 10th grade class of SMKN 4 Malang, which is about 1,100 students. There was a question and answer portion and some incredible students came forward to ask questions in English in front of all their peers. One of my favorite questions was “what’s your favorite Indonesian food?” Which I answered, “Pangsit mie!”

My first week in Labuan Bajo was pretty incredible. I was greeted at the airport by approximately 50 students and teachers from my school. As soon as I arrived at the school, I was met by 600 people including a man who handed me a Bintang beer and a live chicken. The ceremony was somewhat of a blur, but I had never felt so welcomed in my life. The town is breathtakingly beautiful, and I’m quite excited to explore and meet my community members. 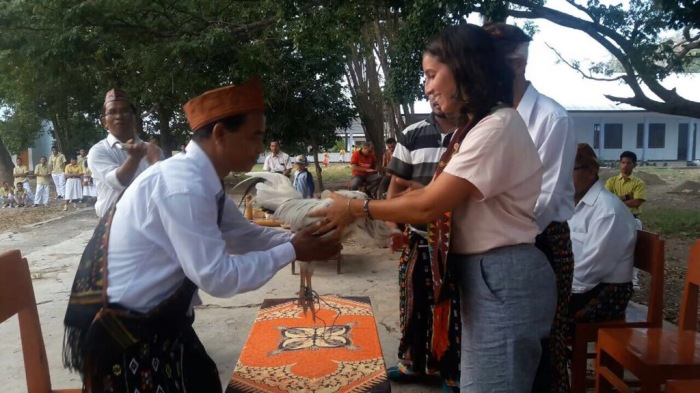 Like Kyra, I was welcomed to SMK Stella Maris Labuan Bajo with a ceremony. During this ceremony, I was presented with a bottle of Bintang and a live chicken. I affectionately named the chicken, Chicken the Ayam. In addition to taking care of Chicken, I look forward to working with my students and fellow teachers over the next ten months.

In the cool-ish heat of mid-morning, my counterpart and a culinary teacher whisked me away in the middle of the school day so that we could go to the morning market and pick up vegetables and cooking supplies. The market was filled with a mix of familiar and unfamiliar smells, sights, and sounds, and Ibu Alvia and Pak Asrori helped me to bargain and find the best ingredients for my first home-cooked meal.

This is a picture of one of my students at an English debate competition held at Sam Ratulangi University. I chose this picture to represent my first week in Manado because so far this English competition has been the most memorable part of my stay. I was invited by the teacher of my school to watch the students compete and a lot of what they said during the debate surprised me. The kids talked about things that I hadn’t imagined people in Indonesia would be familiar with – things like intersectional feminism, heteronormativity, and non-binary gender identities. It was awesome to learn that some students at Eben Haezar, my school, are much more progressive than those I met in the U.S.

This week I got to meet amazing students who have far more talent than I do. One of those talents was culinary arts! They taught me how to make a typical desert called klepon, which was delicious. I’m glad I can learn from the masters!

SMAN 1 Limboto opened up another campus a few years ago in Malahu to serve the needs of rural students. It’s just an hour into the mountains north of my school outside Gorontalo. The campus has fourteen 10th graders and nine 11th graders. Driving up the mountain is absolute gorgeous – we passed by a small waterfall, drove past a cloud, and saw endless corn fields. My principal told me to wear her sunglasses for this photo.

Pak Fauzan is the amazing counterpart that is helping me navigate Demak. He is an amazing woodworker who made the wardrobe and bedframe in my house. This is a picture of us in his workshop in Semarang, which was filled with dozens of his excellent creations.

During an extended lunch break, my co-teacher and counterpart took me to Kupang, Ambarawa. She wanted me to appreciate the rice paddy fields at the base of the mountains during the overcast weather. We walked through the fields, and she pointed out how differently paddy fields can be planted. At the end of our trip, she surprised me by finding a little pond filled with fish that give people “pedicures” by softly nibbling at and cleaning the base of their feet!

On a sunny day, green rice paddies and palm trees are especially bright outside Gorontalo city. To see more of the neighborhood, a local friend showed me the jogging route other ETAs had taken around the town. It wrapped around the side of the school then abruptly opened out onto rice fields. As we ran down the road, a farming family generously called us over, cut open coconuts for us, and taught us the value of each part of the coconut. Disclaimer: this was not a sunny day. 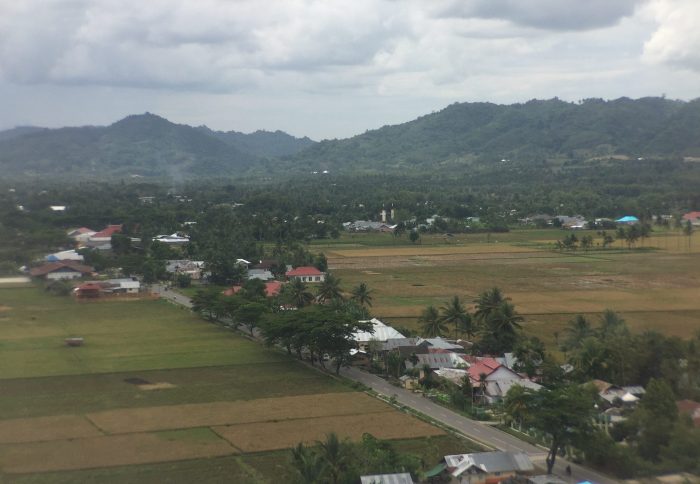 The city of Semarang, which sits on the northern coast of Central Java, and has long been a key port city in the archipelago. The country’s turbulent history is etched into Semarang’s built environment, which is still dotted with Dutch structures in various states of disrepair. One such building, Lawang Sewu (Javanese: “Thousand Doors”), once served as the city’s Dutch East India Company headquarters, and is now rumored to be haunted by the ghosts of prisoners executed during the Japanese occupation of World War II.

Recent census data puts the population of Padang in West Sumatra at about 900,000 people, but my counterpart at SMAN 11 says it’s actually closer to 10 million. I wouldn’t know: I live in Bungus, a coastal suburb about 45 minutes south of the city center, home mostly (in terms of space occupied) to huge trucks of petroleum. Their drivers look to be the same kids who drive the angkots, and my goal, apposite teaching English, learning Indonesian, and exploring this green-blue land, is to hitch a ride with one of them. 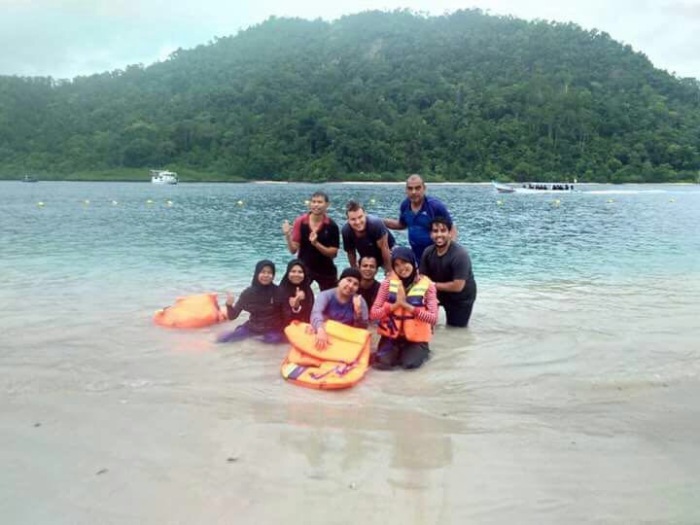 The Saturday before we left for Jakarta for our in-country orientation, Kate and I visited Toboali, a city located South of Pangkalpinang, for the annual City of Fire Festival. One of my most favorite attractions at the festival was the kite-flying competition. Despite the excessive midday heat, the beach was crowded with hundreds of people, both young and old, squinting into the sky to spot the winning kite. We left a little early but stayed long enough to see the red dragon kite launch into the air!

When I went to a waterfront dinner with my school board during my first week on site, I was tired, irritable, and anxious. One school board member told me, “It’s not always fun to not be in a big city, but we small-town people are, how you say, warmer than the sun.” It was the best welcome I could have received. 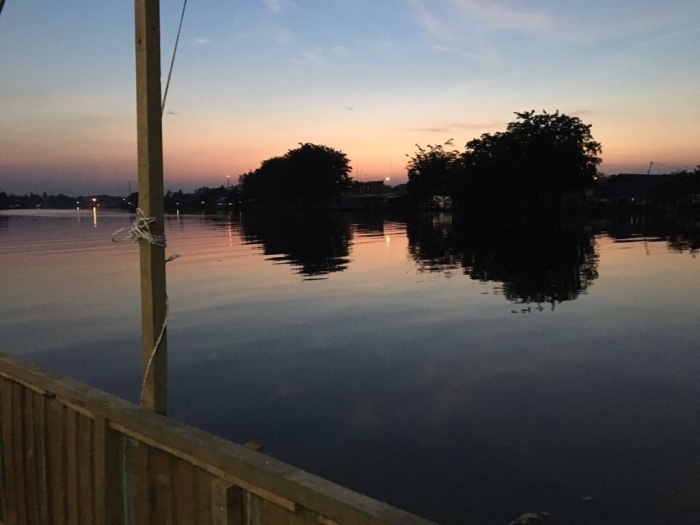 My first week in Padang was a wild ride! I met all of my teachers and students and gave a speech in front of the whole school. My favorite moment was probably on my walk home from school, when I kept running into a goat, so I named him Goofy the Goat!

Kendari is a small, yet bustling city nestled in Kendari Bay on Sulawesi. Bright colors line almost every street of the scenic city. It serves as a reminder of the great love of art and creativity the people of Kendari have. As I walked down this street and snapped a photo, Ibu Ani explained that such displays of art are communal – they are a testament to the strength and unity of Kendari.

I leave my front door open to ventilate my house during the day, but on one occasion, a neighbor decided to stop by. He didn’t know I was clearly from out of town, but he wanted to celebrate his newborn child with me. And as a token of that celebration, he brought plates and plates of food to me, very generously. It was a good introduction to where I’ll be staying for the next 9 months.