– by Kelly Richard, ETA in Surabaya –

It is almost impossible to go an entire day in Indonesia without eating rice. My co-teachers and Indonesian friends are shocked and concerned when I explain that American cuisine includes their staple carbohydrate only once or twice a week at most. I often find that despite my protests, rice is placed on my plate in large and intimidating quantities. “You haven’t eaten if you haven’t eaten rice” is a common phrase that floats around the teacher room at my school.

Despite my lackluster feelings for rice (I like it just fine, but I don’t enjoy eating rice for breakfast, lunch and dinner every day), I am fascinated with rice production and farming. I grew up in North Carolina, where the king crop is tobacco. To me, the beautiful and lush green fields of shimmering water and tiny rice sprouts is new, exciting and very picturesque. Knowing very little about rice production (where exactly ON the plant does the rice even come from?) I have done a little bit of research into rice farming and culture to satisfy my curiosity.

It turns out, this country is the third largest rice producer in the world. Rice also accounts for a little less than half of the caloric intake of Indonesians (which is made evident by the white sticky grain’s persistence to be the star of every meal).

To grow rice, you need a field that is wet and has rich soil, but isn’t a pond. Rice needs to be wet, but not drowned. It is common to start growing rice in one location, where the soil is only damp and the seedlings are young, before moving them to a larger field, where the soil resembles a deep puddle, when they are strong enough to survive. When the stalks develop hard, yellow grains at the tops, that is when it is time to harvest.

The structure of rice fields is rather ingenious. If the land where the farmer lives is flat, it is sensible that the rice fields also would be. A great deal of Indonesia is, however, mountainous. Therefore, in order to use the space as efficiently as possible, rice is often grown in terraces. If the fields were built on a slant, there would be erosion, and a great deal of difficulty in keeping all of the rice plants equally saturated. Instead, it makes sense to build the fields in levels, so that all the plants can grow on flat soil, submerged in water. This is what results in the beautiful terraced landscapes that speckle Java, among other parts of Indonesia.

In the U.S., the largest and most pervasive crop is undoubtedly corn. But while I grew up listening to my mother bemoan and complain about corn showing up in the least likely places (corn syrup in yogurt, in cookies, in everything…), rice in Indonesia is more than just an economic and dietary staple — it’s a cultural symbol.

According to Indonesian folktales, a long time ago, in Java there was no rice at all. Rice only existed in heaven and was a food of the gods. However, a young man visited heaven and asked Dewi Sri (the goddess of rice) to let him learn how to grow it. She agreed. After living in heaven for some time and learning all of the ins and outs of rice farming, the young man returned home to earth, but not before stealing a few stalks. The young man began to grow rice on earth and soon all of Java was covered in rice fields. 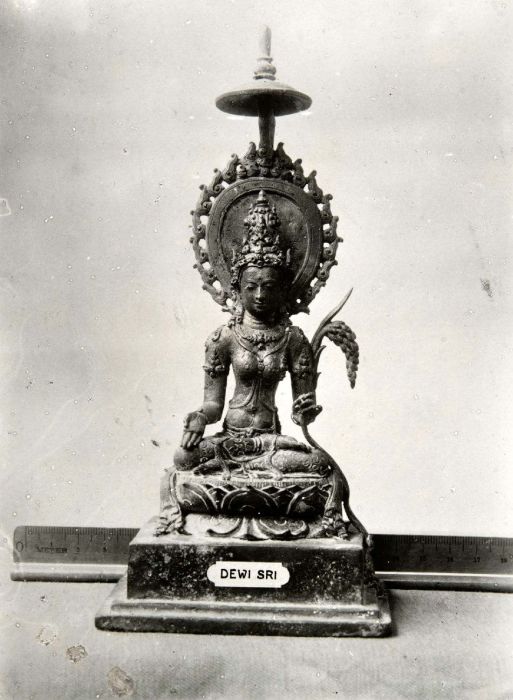 Dewi Sri, the goddess of rice.

Rice has been grown and cultivated in Indonesia for thousands of years. It is the source of nutrition and life for most people, historically and currently, and despite technological advances (rice cookers are fabulous), this tiny grain remains one that is treated with a certain level of reverence. Reverence, due to its popularity but also because of its deeply historical significance.