During orientation in Jakarta, a speaker warned that politics would suffuse life in Indonesia. This is an election year and he said to expect people to be quite engaged in the democratic process. I saw this firsthand at my first Indonesian wedding.

It took an hour in a van driving up preposterously windy roads at night to reach the wedding. Before the drive my host had asked me whether I get carsick. “Never,” I had proudly replied. Fifteen minutes into the drive I was choking on those words. But I figured that was better than throwing them up. I focused on the motorbikes ahead of us to get my mind off of my stomach. From far away their taillights looked like embers floating lazily up into the mountains.

We arrived at a large structure made of tarps lashed to large bamboo poles. The bass from the music inside the tarps blasted so loudly that the tin roofs of nearby houses rattled. Inside, 400 people sat in plastic chairs arrayed along an aisle, facing a stage.  We shook hands with family members of the bride and groom and took our seats. For the next hour, a singer who had more confidence than talent belted songs, some in Indonesian, some in English, with a backup keyboard and drummer. Then people from the audience sang and delivered speeches as the bride and groom looked on with tight smiles.

I was frustrated with how little I could understand of the speeches, but one stood out for its incredible length. It just seemed endless. A man sitting in front of us, who had clearly had enough, began to heckle. Just like a toddler’s whining or excited children at the beach, I believe that heckling transcends language and cultural barriers. I didn’t need to speak Bahasa Indonesia to know he was lobbing “get off the stage!” and “too long!” at the speaker. My host loved it and mischievously started sporadic rounds of applause to force the speaker to stop. None of it worked.

The speeches lasted so long that we had to leave before the dancing even began. As we threaded our way back down to the coast in our van, I asked my host what was the subject of that long-winded speech. I listened incredulously as he told me that for 25 minutes the man had taken the entire wedding hostage to give his stump speech for his political campaign. The longest speech of the entire night was devoted, not to the future of the couple, not to the happiness of their families, but to the speaker’s ambitions for parliament. And nobody stopped him! If that isn’t a sign of a vibrant democracy I’m not sure what is. 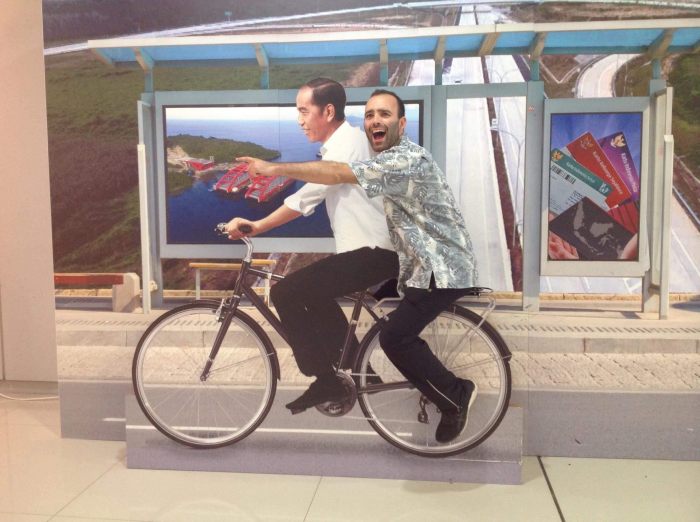 Photo: Andrew experiencing his own Indonesian political awakening riding on the back of a cardboard cut-out of President Joko Widodo